KINGSMAN CUP JUNIOR INTERNATIONAL 2012
Northern Ireland v England
The Reading Rooms
Bangor
Co Down
N.Ireland
England 19-13 N.Ireland
Congratulations to the England side who won this event .
Our team of Jonathon Snee, Adam Stewart and Luke Christain deserve much praise for winning the two day event , which was our first Junior competition truimph in 2 years (since we last won the Kingsman Cup in Belfast in 2010).
Jonathon Snee was unbeaten over the 2 days and acheived an excellant win over Kenny Campbell , who himself has represented his country as a senior international already.
Both Adam Stewart and Luke Christain (who was earning his 4th cap) pulled their weight also in what was a real team effort.
Thanks must go to Simon Snee, John Stewart and Darren Christain who supervised the Junior Team.
The Junior team now will move onto this summers W/G Cup which we excpect now to be held in England, and will be contested on the weekend of 28-29th July.To date the Rep of Ireland , Northern Ireland and England A & England B have entered.
The W/G Cup will prove a harder challenge, however we are sure our teams will rise to this exciting challenge.

The England Junior Billiards Team played in the Kingsman Cup in Northern Ireland over the weekend. 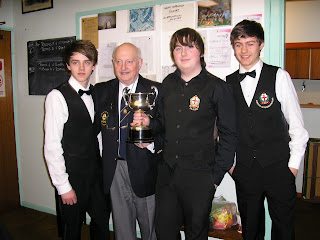